Join us for the 2020 LIVE WORKSHOPS – Register Now

The Anatomy of a TED Talk: Sheryl Sandberg’s “Why We Have Too Few Women Leaders”

Welcome back to our Anatomy of a Ted Talk Series!  We love featuring these TED talks to help YOU on your way to designing your talk!

Sheryl Sandberg is the chief operating officer (COO) of Facebook and founder of Leanin.org. In June 2012, she was elected to Facebook’s board of directors by the existing board members becoming the first woman to serve on its board. Her powerful message for women is one that is worth hearing!

A while back, I introduced you to the  FRAMEWORK that I created, which my clients use to create their Talks. It breaks down the presentation into different key elements that contribute to an overall great talk. This is NOT A FORMULA – nor a cookie cutter, step-by-step process. It’s a simple framework– the box which holds the sand– so you can create your unique, authentic talk! 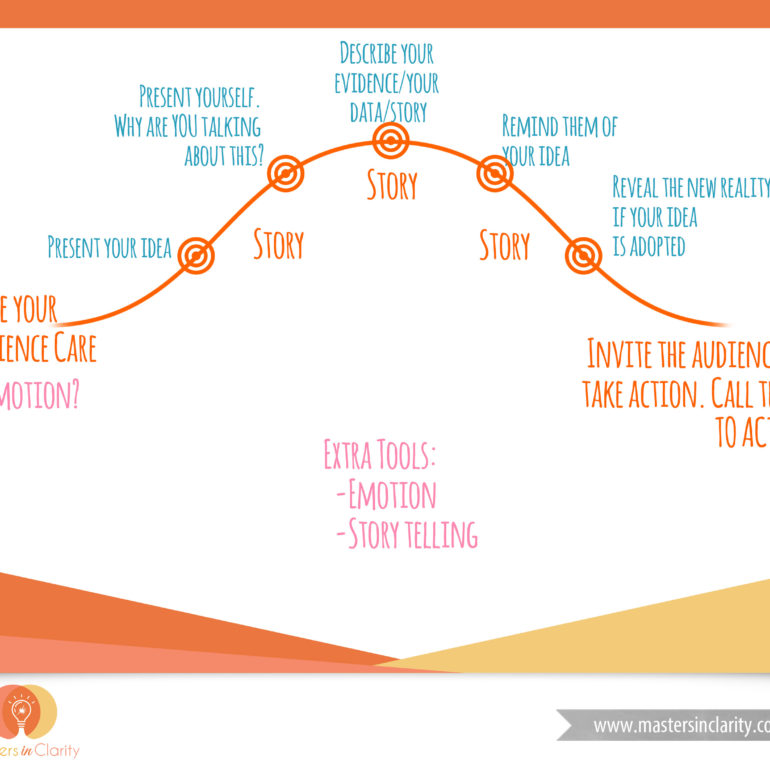 Masters In Clarity’s 7 Steps to Write Your Talk

Let’s take a look at how Sheryl Sandberg’s powerful 15-minute talk fits in with the framework!

MINUTE 00:13 “So for any of us in this room today, let’s start out by admitting we’re lucky. We don’t live in the world our mothers lived in, our grandmothers lived in, where career choices for women were so limited. And if you’re in this room today, most of us grew up in a world where we have basic civil rights, and amazingly, we still live in a world where some women don’t have them. But all that aside, we still have a problem, and it’s a real problem.”

MINUTE 00:13 “And the problem is this: Women are not making it to the top of any profession anywhere in the world.”

MINUTE 01:20 “We also have another problem, which is that women face harder choices between professional success and personal fulfillment”

MINUTE 02:28 “So the question is, how are we going to fix this? How do we change these numbers at the top? How do we make this different? I want to start out by saying, I talk about this — about keeping women in the workforce — because I really think that’s the answer.

MINUTE 03:58 “My talk today is about what the messages are if you do want to stay in the workforce, and I think there are three. One, sit at the table. Two, make your partner a real partner. And three, don’t leave before you leave. Number one: sit at the table.”

MINUTE 03:23 “I left San Francisco, where I live, on Monday, and I was getting on the plane for this conference. And my daughter, who’s three, when I dropped her off at preschool, did that whole hugging-the-leg, crying, “Mommy, don’t get on the plane” thing. This is hard. I feel guilty sometimes. I know no women, whether they’re at home or whether they’re in the workforce, who don’t feel that sometimes. So I’m not saying that staying in the workforce is the right thing for everyone.”

MINUTE 03:58  “Just a couple weeks ago at Facebook, we hosted a very senior government official, and he came in to meet with senior execs from around Silicon Valley.”

MINUTE 00:13 “And the problem is this: Women are not making it to the top of any profession anywhere in the world. The numbers tell the story quite clearly. 190 heads of state — nine are women. Of all the people in parliament in the world, 13 percent are women. In the corporate sector, women at the top, C-level jobs, board seats — tops out at 15, 16 percent. The numbers have not moved since 2002 and are going in the wrong direction. And even in the non-profit world, a world we sometimes think of as being led by more women, women at the top: 20 percent.”

MINUTE 5:57 “women systematically underestimate their own abilities. If you test men and women, and you ask them questions on totally objective criteria like GPAs, men get it wrong slightly high, and women get it wrong slightly low. Women do not negotiate for themselves in the workforce. A study in the last two years of people entering the workforce out of college showed that 57 percent of boys entering, or men, I guess, are negotiating their first salary, and only seven percent of women. And most importantly, men attribute their success to themselves, and women attribute it to other external factors.”

MINUTE 7:40 “here’s a famous Harvard Business School study on a woman named Heidi Roizen. And she’s an operator in a company in Silicon Valley, and she uses her contacts to become a very successful venture capitalist. In 2002 — not so long ago — a professor who was then at Columbia University took that case and made it [Howard] Roizen. And he gave the case out, both of them, to two groups of students. He changed exactly one word: “Heidi” to “Howard.” But that one word made a really big difference. He then surveyed the students, and the good news was the students, both men and women, thought Heidi and Howard were equally competent, and that’s good. The bad news was that everyone liked Howard. He’s a great guy. You want to work for him. You want to spend the day fishing with him. But Heidi? Not so sure. She’s a little out for herself. She’s a little political. You’re not sure you’d want to work for her. This is the complication. We have to tell our daughters and our colleagues, we have to tell ourselves to believe we got the A, to reach for the promotion, to sit at the table, and we have to do it in a world where, for them, there are sacrifices they will make for that, even though for their brothers, there are not. ”

MINUTE 6:31 “So what we’ve learned is that our state of discord is bad for everyone. It is a deeply unhappy state of being. And people tell us this again and again. They say they appreciate the chance to engage respectfully, with curiosity and with openness, and that they’re glad and relieved for a chance to put down their arms.”

MINUTE 13:56  “My generation really, sadly, is not going to change the numbers at the top. They’re just not moving. We are not going to get to where 50 percent of the population — in my generation, there will not be 50 percent of [women] at the top of any industry. But I’m hopeful that future generations can. I think a world where half of our countries and our companies were run by women, would be a better world. It’s not just because people would know where the women’s bathrooms are, even though that would be very helpful. I think it would be a better world. I have two children. I have a five-year-old son and a two-year-old daughter. I want my son to have a choice to contribute fully in the workforce or at home, and I want my daughter to have the choice to not just succeed, but to be liked for her accomplishments.” 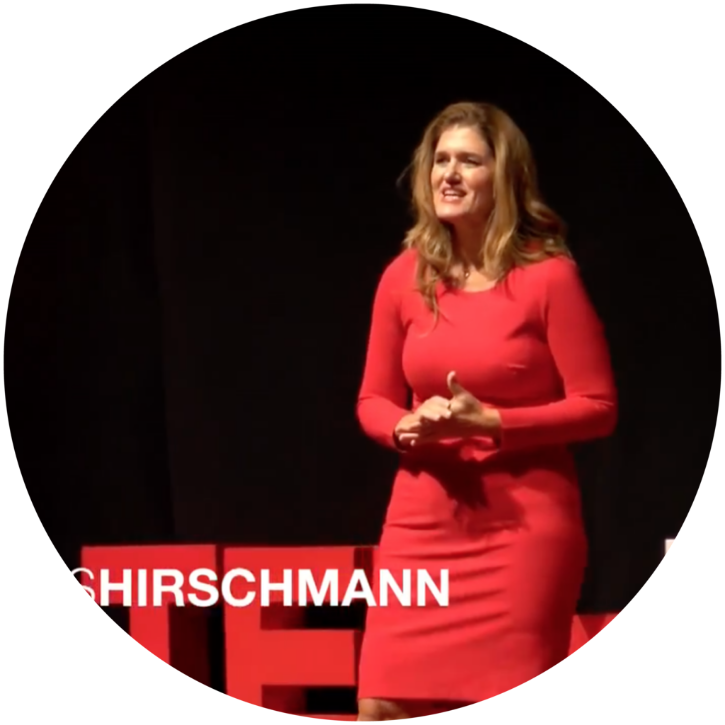 Dolores Hirschmann is an internationally recognized strategist, Clarity coach, TEDxOrganizer, Speaker & Author. She has over 20 years experience helping entrepreneurs, companies & organizations realize their potential—by guiding them to CLARITY—to define their CORE IDEA, message and market strategy needed to reach their next level of growth. As a Speaker Coach Dolores guides speakers to go from successful professionals to thought leaders in their field. If you would like to learn more visit: www.mastersinclarity.com or download her free resource “STAND OUT THE TED WAY” 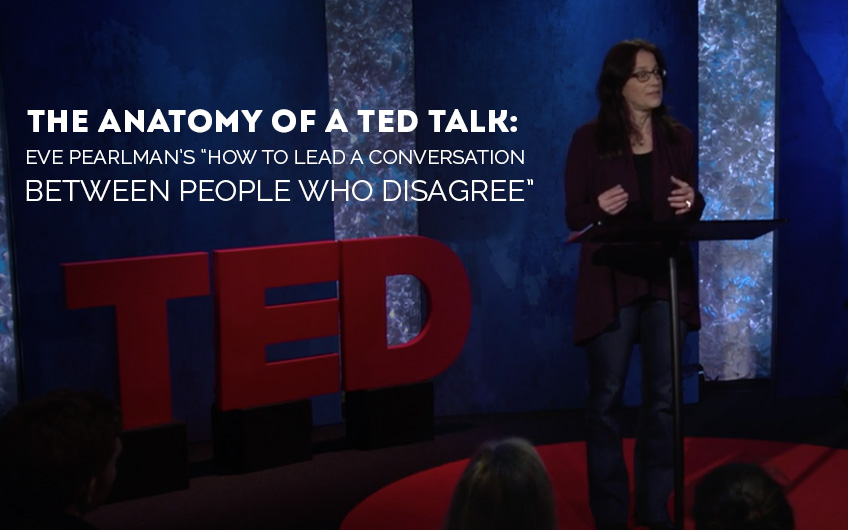 The Anatomy of a TED Talk: Eve Pearlman’s “How to lead a Conversation Between People who Disagree” 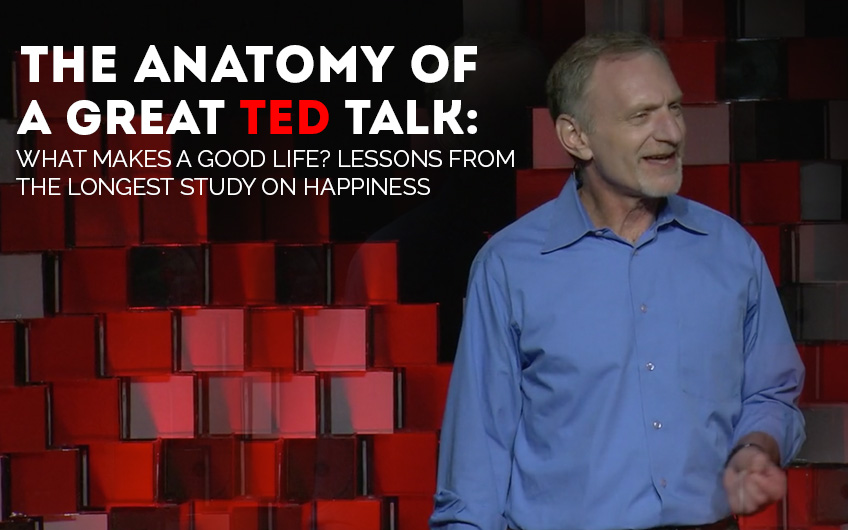 The Anatomy of a TED Talk: Robert Waldinger’s “What makes a good life? Lessons from the longest study on happiness” 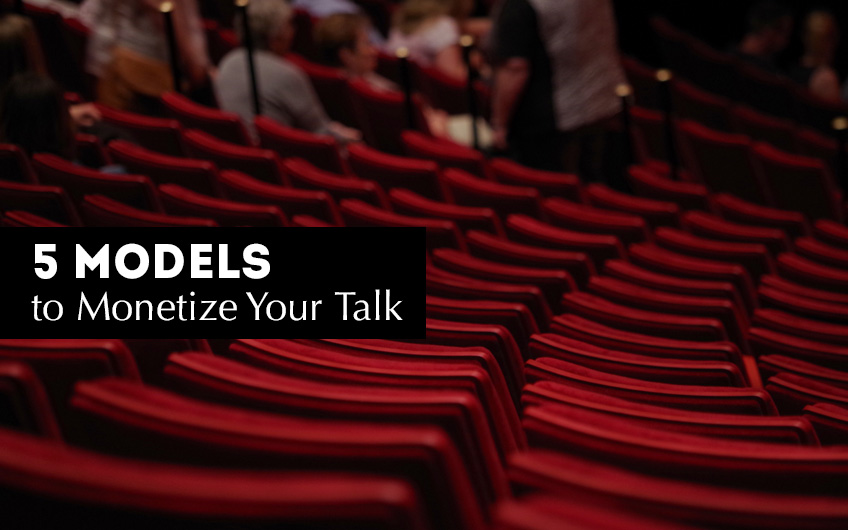 5 Models to Monetize Your Talk